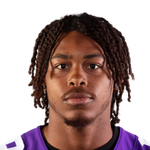 He's averaging a massive 3.20 yards per route run this year, which ranks second to only Davante Adams. How good is that? Michael Thomas led all wide receivers last year with 2.88 yards per route run. It helps that he ranks second in yards (286) on targets over 20 yards. Is that sustainable? Well, probably not, but it does help that Cousins throws the deep ball on 20.6 percent of his attempts, which ranks as the highest mark in football. The Packers have done a good job with slot-heavy receivers this year, though Randall Cobb threw a wrench in that last week when he caught eight passes for 95 yards. We don't have a big sample size to go off with Chandon Sullivan, who's a third-year cornerback who went undrafted, and is playing his first full-time role. But Jefferson has played just 42.3 percent of his snaps in the slot, so he'll also see a lot of Josh Jackson as well, who's been a bust since the Packers drafted him in 2018, allowing a 68.6 percent catch-rate and a touchdown every 14.3 targets. Knowing Jefferson has totaled 100-plus yards in three of his last four games, you have to keep him in lineups as a low-end WR2, though volume is the concern in this game.