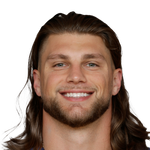 Remember when Tonyan was the No. 1 tight end in fantasy coming off his three-touchdown game against the Falcons? Since that time, he's seen six targets and caught five passes for 57 yards. He has been trying to play through a few injuries, so maybe he's getting healthier as the weeks go on? The Vikings don't look so bad on paper against the tight end position, as they've allowed the 14th-fewest fantasy points per game to the position, but when you look at their efficiency numbers, they're likely a top-five matchup for tight ends. They've allowed an 80.0 percent catch-rate (3rd-highest), 15.13 yards per reception (highest in NFL), 12.1 yards per target (most in NFL), and 2.41 PPR points per target (4th-highest). That doesn't seem like such a brutal matchup, does it? We should pay attention to the injury reports because if Tonyan practices in full, he should be a solid low-end TE1/high-end TE2 streamer.