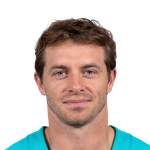 Fun fact: Edwards-Helaire ranks second in the NFL with 33 broken tackles. Yes, the Chiefs added Bell to the backfield, but it's not due to Edwards-Helaire not being able to carry the workload. In Bell's first game, the split in opportunities was Edwards-Helaire 12, Bell 6. It was an odd game in the snow, so we can't take too much away from it. I'm sure that Bell would love to stick it to his old team this week, but will Andy Reid give him a bigger role to do so? The Jets have faced the fourth-most weighted opportunity to running backs, as they've averaged a massive 203 touches through seven games. That amounts to 29.0 per game, so there should be plenty to go around in a game they're almost 20-point favorites and projected to score 34.0 points. The Jets were a solid run defense last year, though this team looks like they've simply given up on the season and have now allowed 90-plus rushing yards to three different running backs. Their schedule hasn't even been tough, as they've played the Bills running backs twice, the 49ers, Colts, Broncos, Cardinals, and Dolphins. The issue here is that we may not see the check-downs to running backs as much knowing the Jets cornerback issues, and that's a big part of Edwards-Helaire's value in this offense. You should still be starting him as a low-end RB1/high-end RB2 this week. Bell's role should grow this week, as we should see more touches available than the 15 there were between these two running backs last week. I'd expect at least 28-plus touches out of them in this game, which should put Bell in the 10-12 range against his former team. He should be considered a mid-to-high-end RB3.