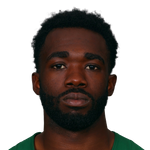 The good news is that he saw seven targets in his NFL debut, which is more than most receivers can say on a weekly basis. He caught four of them for 42 yards, which isn't bad when you consider the matchup against the Bills. The Jets receivers have been targeted 22.9 times per game, so there are targets to go around, especially if Jamison Crowder sits out again. The unfortunate part is that the Chiefs are not a matchup to attack with wide receivers, as they've allowed just eight wide receviers to finish as top-48 options (WR4 or better), and five of them needed to score, which is something the Jets receivers have done just four times all season. All in all, the 911 yards the Chiefs have allowed to receivers ranks second in the NFL, though the 130.1 yards per game is the best in the NFL. Mims is someone who should be stashed, but he's nothing more than a WR5 this week.