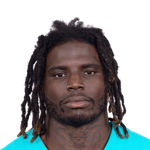 He's now scored a touchdown in 6-of-7 games but has still yet to crack 100 yards receiving. I guess we shouldn't be too surprised considering he accomplished that feat just twice during the 2019 season, so twice in his last 19 games. Does that change this week? There have already been three receivers who've hit the century mark against the Jets this year, including Cole Beasley, who tagged them for 11/112/0 last week. The Jets are allowing a massive 70.5 percent completion-rate to wide receivers, which ranks as the second-worst to only the Texans. The lone downside for Hill is that Brian Poole is the Jets best cornerback, and he's been solid over the last two years while covering the slot (where Hill plays 65 percent of the time), allowing just 58-of-88 passing for 490 yards and one touchdown. That's just 5.57 yards per target, though Hill isn't your average slot receiver. Poole's 4.5-second speed can certainly show up here. Hill is a favorite of mine in tournament lineups this week and should be in redraft lineups as a WR1.