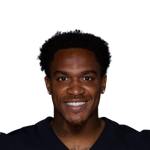 Someone asked Watkins on Twitter during last week's game if he'd be back in Week 8 and he said yes, so it seems he's feeling better. The three full games he's played this year have netted 9, 8, and 7 targets, so he's certainly someone who needs to be on the fantasy radar. The Jets have been a decent matchup for receivers to this point, although the 1.81 PPR points per target they've allowed is right near the league average. That's kept them right in the middle of the pack when it comes to fantasy points allowed, as they rank 15th against wide receivers. Watkins primary matchup would be the best on the field, as Pierre Desir has allowed 24-of-33 passing for 299 yards and five touchdowns (most in NFL) in his coverage. We have to see how Watkins is doing in practice before playing him with any confidence, but this matchup isn't one that should cause you to be concerned. If he practices in full, he can be considered an upside WR4. If he doesn't play, Robinson would move into the WR4/5 conversation.