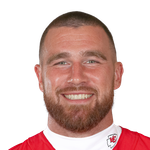 He's coming off a game where he totaled just three receptions and 31 yards. Sure, it was in the snow, but you know what he did the last time he came off a three-catch performance? He caught eight passes for 108 yards and a touchdown. This is one of those matchups where if you simply look at fantasy points allowed, you'll see the Jets rank 13th against them, which is not great, but also not bad. When you see they've faced the eighth-fewest targets despite playing all seven games, that's the giveaway. From an efficiency standpoint, they've allowed 2.42 PPR points per target to tight ends, which ranks as the third-most in the NFL, behind only the Jaguars and Falcons. Kelce leads the NFL in both red zone targets and targets inside the 10-yard line. Well, the Jets have allowed 5-of-11 red zone targets to tight ends go for touchdowns. Start Kelce as an elite TE1 and expect game-breaking upside.