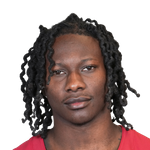 He leads the NFL in targets (16) that have traveled over 20 yards in the air. He's only caught 31.3 percent of them, but if that percentage goes up at all, you're going to start seeing big fantasy performances. His 666 air yards through six games was the third-highest mark in the NFL. 61.5 percent of the fantasy production the Steelers have allowed to skill-position players has gone to wide receivers, which is the second-highest mark in the league. The Steelers have surprisingly allowed three 100-yard receivers through six games. Despite already getting their bye out of the way, they've allowed 21 pass plays of 20-plus yards this season, which ranks as the 12th-most. He's going to see Joe Haden in coverage most of the game, who's allowed 14.4 yards per reception in his coverage, including three receptions over 20 yards. He's also allowed two touchdowns over the last three games. This is not a matchup where you play receivers expecting tons of receptions, but rather look for the big play. Knowing the Ravens aren't going to be running on the Steelers, we should expect even more targets to Brown this week, and the fact that they've allowed the seventh-highest yards per reception to wide receivers (14.23), Brown has the best chance to succeed. He should be played as a decent WR3 this week.