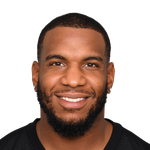 Despite all the Steelers receivers being healthy last week, Ebron saw a season-high eight targets against the Titans. Sure, it helps that Roethlisberger threw 49 passes, but it's still a good sign for Ebron. The 42 routes he ran last week ranked second among tight ends, which is a great sign for production. The Ravens are a fairly dominant defense against almost all positions, but they're simply average against tight ends, allowing the 14th-most fantasy points to them. The 7.06 yards per target is close to the league average, while the touchdown every 15.7 targets is right there as well. They've allowed four tight ends hit double-digit PPR points against them, though it did require touchdowns for two of them. The concern here is Roethlisberger's struggles in Baltimore over the last five years, but Ebron's role is growing and he seems locked into five-plus targets. Consider him a mid-to-high-end TE2.