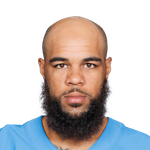 Despite missing more than half of a game with his back injury and having his bye week, Allen ranks seventh in the NFL in targets since the start of Week 2, which is when Herbert took over. In the four full games Allen has played, he's totaled 10, 19, 11, and 13 targets. That's absolutely ridiculous volume, especially when you consider Herbert is playing at a Pro Bowl level. The matchup with the Broncos isn't the same as it used to be, as Allen and Chris Harris Jr. would duke it out over the middle of the field. Instead, he'll see a combination of the Broncos cornerback trio of Bryce Callahan, Michael Ojemudia, and A.J. Bouye. Considering no teams have had much success running on the Broncos, they're gone to the air, which is why receivers have seen 21.3 targets per game against them. They've been pretty good considering all that's happened (loss of Von Miller and Jurrell Casey, injury to Bouye), allowing just 7.68 yards per target and 1.70 PPR points per target, which are both below the league average. But again, the volume has allowed receivers to score 37.7 PPR points per game against them, which ranks as the 14th-most in the league. They have allowed seven different wide receivers to post top-25 numbers, which is more than a stable enough floor for someone like Allen, who's made his way into the WR1 conversation.