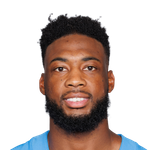 There have been just two times all season where Williams has seen more than four targets. Week 1, when Tyrod Taylor was under center, and Week 5, when Keenan Allen had to leave the game with back issues. Am I ready to move on? No, not with the way that Herbert has played. We have just too small of a sample size to say he's nothing with Allen in the lineup. He may have the best matchup on the field this week, as he'll play most of his snaps against rookie Michael Ojemudia, a third-rounder who's been bleeding yardage in his coverage. He's allowed 23-of-38 passing for 328 yards and two touchdowns in his coverage to this point, which amounts to a 106.0 QB Rating. That's a massive 14.3 yards per reception, which is perfect for someone like Williams, whose average depth of target is 17.2 yards down the field, which ranks third in the NFL. He's not someone who needs to be played but he is someone who can be plugged in as an upside WR4 considering the Chargers will have trouble moving the ball on the ground. He's a solid leverage play off Allen in tournaments.