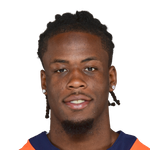 After totaling at least 55 yards in each of his first four games, Jeudy has fallen off the fantasy map, as he's failed to top 32 yards in each of his last two games, though we should give him a pass for the game last week that was played in a blizzard. The Chargers are not a matchup that you should be expecting a wide receiver to get back on track, as they've allowed the 10th-fewest points to the receiver position. It's not just a lack of volume, either, as they've allowed just 1.65 PPR points per target, which is tied for the sixth-lowest mark in the league. He'll see Desmond King in coverage much of the day, the Chargers slot cornerback who's allowed 50-of-61 passing for 531 yards and two touchdowns since the start of last year. That's a ridiculously high 82.0 percent catch-rate, though the receptions have amounted to just 10.6 yards a pop, so he'll need volume to crack out some numbers. If Tim Patrick can't play with his hamstring injury, Jeudy would likely be a candidate for six-plus targets and be considered a decent WR4. If Patrick does play, Jeudy would fall into riskier territory with his recent lack of targets.