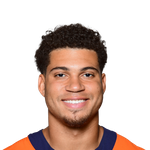 Fant returned to the lineup last week and ran a tight end team-high 26 routes, though they only netted three catches for 38 yards, and he appeared hobbled at times throughout the game. Meanwhile Okwuegbunam ran 18 routes and racked up seven catches for 60 yards. Suddenly, Fant may have competition for targets, as "Albert O" has totaled 13 targets over the last two weeks. Don't forget that him and Drew Lock were teammates at Missouri and connected really well. The Chargers have not been a dominant defense against tight ends, and in fact, they are below average, allowing 2.10 PPR points per target, which ranks as the seventh-highest mark in football. Teams have targeted their tight ends just 6.5 times per game, which is far from ideal, but the Broncos have targeted their tight ends 10.2 times per game, so something has to give. With Tim Patrick looking extremely iffy, there may be even more targets to go around. There have already been three top-seven performances by tight ends against the Chargers, so as long as Fant practices in full at some point this week, he should be considered a top-10 play. If he doesn't, things get a bit dicier, so stay tuned here for updates. As for Okwuegbunam, he'd be a borderline TE1 if Fant were to sit out. If Fant plays and Patrick sits, he moves up into the TE2 with upside category. Clearly, there's a lot to sort out here as the week goes on.