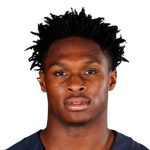 He's playing a full-time role in the offense and has now seen at least five targets in five straight games, which puts him on the fantasy radar. He should've had a very long touchdown on Monday night, but Foles just missed him with no defender in sight. If Allen Robinson were forced to miss this game, Mooney's floor would go up, and he'd need that because just 46.7 percent of the targets against the Saints have been directed at wide receivers. They've seen just 93 targets to the position, which is a league-low, and amounts to just 15.5 per game. When receivers do catch the ball, it goes for A TON. They've allowed 15.7 yards per reception (1st), 10.44 yards per target (2nd), and a touchdown every 10.3 targets (1st). That all amounts to 2.29 PPR points per target. To put things in perspective, if Mooney saw just five targets and was an average receiver against them, he'd score 11.5 PPR points. He's not the worst hail mary play in this game, but he's still a boom-or-bust WR5 due to his lackluster quarterback play. If Robinson were to miss the game, it would bump his floor up a bit.