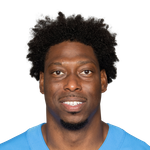 We figured we could rely on six-plus targets with Michael Thomas and Emmanuel Sanders out of the lineup... but no. Cook has now seen 15 targets over his last four games, which is far from ideal. They have been okay in fantasy because he's scored on three of them, but his yardage leaves something to be desired (32 yards or less in three of those games). There are just five teams who've seen more targets directed at tight ends than the Bears. That's led to 52 yards and/or a touchdown to 6-of-7 tight ends. The only tight end who failed to hit one of those markers was Ian Thomas, who saw one target. It's not that the Bears are a smash spot, as only two of those tight ends were able to hit top-12 numbers. Going back to the start of last year (span of 23 games), they've allowed just three tight ends to top 56 yards against them. But again, with the receivers ailing, we should expect targets for Cook, and that puts him in the TE1 conversation this week.