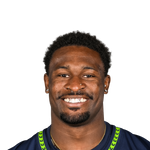 He's totaled 296 yards on passes that have traveled over 20 yards in the air, which ranks as the most in the NFL. His efficiency on those passes is ridiculous, as he's caught 7-of-12 for 296 yards and three touchdowns. Still, it's going to lead to some disappointing performances, like the one he had on Sunday night. The 49ers haven't been a team to actively target with wide receivers, but it's worth noting they've allowed four passes that have gone for 40-plus yards, which is the seventh-most in the league. It's pretty crazy what Jason Verrett has done since re-joining the 49ers defense, as he's allowed just 46 yards on 154 snaps in coverage. That 0.30 yards per snap is the lowest in football. Between Verrett and Emmanuel Moseley, they've allowed just 60.0 PPR points on 40 targets in coverage, or just 1.50 points per target. That would rank second in the NFL to only the Bears defense. All season, the 49ers have allowed just three top-24 receivers, with DeAndre Hopkins being the only No. 1 receiver on that list (others are Preston Williams and Braxton Berrios). Metcalf has game breaking one-play upside, so he can turn into a WR1 at any point, so you're starting him in a game the Seahawks are likely to throw more than normal with their running back health issues. Start him as a high-end WR2 in redraft leagues but reserve him for tournaments in DFS.