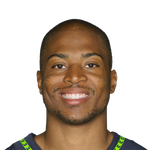 His 53.0 PPR points in Week 7 were the most since Will Fuller's 53.7 PPR points in Week 5 of last year. He came into Week 7 as the No. 17 wide receiver and left that game as the No. 2 receiver. There are going to be some swings in his performances with Metcalf out there stealing some production, but Lockett should've been a borderline WR1 in lineups regardless of that game. The 49ers have allowed just 7.36 yards per target to wide receivers, which is the lowest number in the league. They've allowed just three receivers to finish with more than 60 yards. There's been just four receivers who've totaled more than four receptions. They've done a good job with slot receivers over the last two weeks on the stat sheet, as Julian Edelman caught just one pass for 13 yards while Cooper Kupp caught three passes for 11 yards. I say stat sheet because we all know about Cam Newton's horrendous game, and if you watched Kupp's game, you'd know that he lost the ball in the lights on what would've been a long touchdown, and then he dropped another end zone target. Believe me when I say that Jamar Taylor is not good, and he's the cornerback who'll be covering Lockett most of the time. He's been on six teams over the last four years. Lockett should remain in lineups as a high-end WR2 despite the tough matchup on paper.