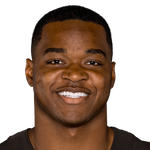 Considering how bad the Cowboys offense has been the last two weeks, Cooper owners should be extremely satisfied with his performances of 7/79/1 and 7/80/0. He's finished as a top-30 wide receiver in 6-of-7 games, which is consistency that's hard to find. The Eagles are surely going to stick Darius Slay on him this week, which hasn't been great for receivers, though it's also not a death wish. He's allowed 27-of-37 passing for 277 yards and one touchdown in his coverage to this point, but the biggest game they've allowed to a No. 1 receiver was Terry McLaurin's five-catch, 61-yard performance back in Week 1, which was with Dwayne Haskins under center. On paper, it shows the Eagles have allowed the 12th-most points per game to receivers, but when you remove the THREE rushing touchdowns and rushing yards, they've allowed the 11th-fewest points to receivers. Cooper should be considered a mediocre WR2 who can be a victim of bad quarterback play at any time.