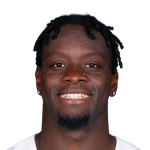 He's now totaled just 17 targets over his last four games, which is not enough to be a consistent fantasy producer, especially when you factor in the poor quarterback play. Building on that, he's finished with less than 30 yards in three of his last four games. He'll see Avonte Maddox in coverage most of the time, which is not a horrendous matchup by any standards. Over the last two years, he's allowed 59-of-90 passing for 764 yards and four touchdowns in his coverage, which is good for a QB Rating over 105.0. But again, this comes back to his quarterback play and getting consistent targets. It's tough to see the Cowboys having much success on the ground against the Eagles, so we should see increased pass attempts if their defense can get off the field. Gallup has moved well out of must-play territory and should be considered more of a risk/reward WR4/5.