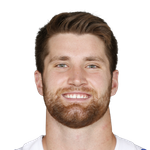 After looking what might be a solution to tight end problems has turned into... well, another problem. Schultz has totaled just 63 yards over the last three games combined. His targets have dipped as well, which should be expected considering they can't sustain drives on offense and their defense can't get off the field. It is worth noting that the Eagles have been pretty awful at defending tight ends this year, allowing an 81.1 percent catch-rate and 2.29 PPR points per target to them. They've already allowed six different tight ends to finish with at least 9.3 PPR points against them, which is actually a stable floor this year. Included in that bunch is a 39.3-point performance to George Kittle and a 28.4-point performance to Tyler Higbee. Just like the rest of the Cowboys pass catchers, Schultz comes with bad quarterback risk, but this matchup has been one to look forward to with tight ends. He should be considered a middling TE2 who could find his way into the top-10 with some competent quarterback play.