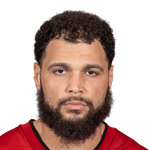 Chris Godwin in the lineup, Evans has been an afterthought. In the three games without Godwin, it's been a different story. He's seen 10, 8, and 9 targets in those three games, totaling 19 receptions, 267 yards, and three touchdowns. In case you've missed it, Godwin has been ruled out for this game with a broken finger. The Giants are going to have James Bradberry shadow him, which hasn't been a pleasant experience for Evans throughout the last two years. In case you forgot, Bradberry shadowed him the last two years while in Carolina. The only game that Evans did well was the one he was targeted 17 times in. To be fair, it is a different defense that Bradberry's playing for, and Evans has upgraded from Jameis Winston to Brady, but it's something. Bradberry has done a solid job with No. 1 receivers this year: Travis Fulgham 5/73/0, Terry McLaurin 7/74/0, Amari Cooper 2/23/0, Robert Woods 6/35/0, and Allen Robinson 3/33/0. That's pretty good, right? Still, it's hard to see a scenario where Evans sees less than eight targets this week, so you have to get him back into lineups as a high-end WR2.