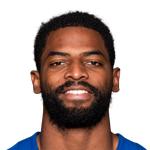 He's now seen just four targets in each of his last two games, and it's limited his production. When you add Sterling Shepard back into the lineup, this was always the concern. Knowing the Bucs opponents have thrown the ball 64.1 percent of the time (4th in NFL), the Giants pass catchers should be pretty busy in this one. The Bucs have used Carlton Davis to shadow some No. 1 receivers, but the Giants don't really have that prototypical No. 1, so we shouldn't assume a shadow. The Bucs have allowed the eighth-fewest points per game to wide receivers, as they've limited them to just 1.69 PPR points per target. Sure, they've allowed 11 receivers to hit 10.5-plus PPR points, but seven of them had to see nine-plus targets to get there. The Bucs have allowed four pass plays to go for 40-plus yards, which is what you need to hope for with Slayton, so treat him as a boom-or-bust WR4 this week.