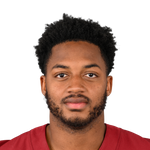 It might not be a bad time to sell Gibson, as his schedule is about to take a turn for the worse. He played against the Giants (twice), Cowboys (twice), Lions, and Bengals over five of his last six games, which have led to great fantasy days. Unfortunately, we don't have that in Weeks 14-15, as he will play the 49ers and Seahawks in those games. Not only are those tough matchups on the ground, but Washington is likely to be in a negative gamescript, which doesn't bode well for Gibson's role.