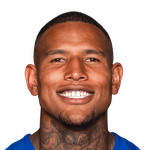 There's Travis Kelce... then there's Darren Waller... then there's everyone else. Waller might not have the ceiling of Kelce, but his floor is mighty close. Waller has produced at least 7.0 PPR points in 24-of-26 games dating back to the start of last year. While that may not seem like much if you own Waller, you need to try and stream for a couple weeks. If you are buying into the fact that the Raiders are likely to throw the ball 40-plus times in this game, you should absolutely love Waller, as he's received a 27.8 percent target share this year, which is easily the most among tight ends (Travis Kelce is at 23.8 percent). On top of that, he leads the NFL with 17 red zone targets, which account for 35.4 percent of the Raiders' red zone targets. Despite tight ends being targeted just 6.8 times per game against the Falcons, they've generated 5.7 receptions, 62.2 yards, and 0.8 touchdowns per game, which are all near the top of the league. Remember how bad the Cardinals were against tight ends last year? They allowed 2.39 PPR points per target to them. The Falcons have played 10-of-16 games and have allowed 2.46 PPR points per target to them. Yeah, this matchup is extremely good. Waller just might beat out Kelce this week.