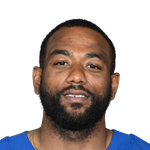 Thank goodness Bill O'Brien isn't still the coach. He'd probably snag a few guys off the street rather than play Coutee. If you didn't watch the Thanksgiving game, you'd see Coutee's finishing line of 2/17/0 as horrendous, but he just missed what would have been a 40-yard completion, but the ball was slightly overthrown. Coutee has the speed (4.4) to stretch the field for Watson, even though many view him as a slot receiver. The Colts have allowed 33 pass plays of 20-plus yards, so even though they've been one of the better defenses in the league, they're not incapable of being beat down the field, and that's evidenced by the 14.16 yards per reception they've allowed, which ranks second in the NFL. I'm guessing they'll keep Coutee in his slot-heavy role, which would put him against Kenny Moore in the slot, who's been solid in coverage, allowing just 32-of-50 passing for 337 yards and two touchdowns on the season. There have been just seven wide receivers who've topped 70 yards against the Colts this year, so this doesn't set up for a big game out of Coutee, but he should be added in all leagues to see what Fuller's absence means for him in the pecking order.