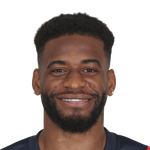 This is funny because I was always the guy saying that Parker was undervalued, and he was, but we've reached the point where I'm abandoning that ship. Last year, he played in eight games with Tua Tagovailoa, and in those games, he averaged 7.1 targets, 3.6 receptions, 43.1 yards, and 0.25 touchdowns. That's... not great. And now you add Will Fuller and Jaylen Waddle to the offense? Parker is the "big body" wide receiver of the bunch, but he's never been a touchdown scorer, finishing with more than four touchdowns just once in his six-year career. His ADP is way too high.