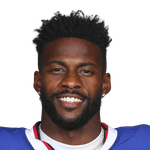 He's now been on four different teams in the last four years, though he's still remaining relevant in the fantasy conversation. He's also going to play with one of the best young quarterbacks in football, though he's clearly behind Stefon Diggs in the pecking order. The move to sign Sanders was odd considering how well Gabriel Davis played last year, but the Bills do run the second-most 4WR sets in football, so they'll be on the field together at times. But still, Sanders is now 34 years old and is likely in Buffalo to provide a reliable receiver in a pinch rather than one who'll pop back into the WR3 conversation. He is what he is at this point, which is a low-upside bye week filler.