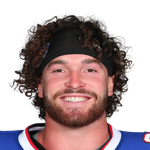 We were hoping to see a second-year jump from Knox, but what we got was essentially the same thing we saw his rookie season. This has led to us hearing about the Bills exploring a trade for Evan Engram, as well as Zach Ertz. They signed Jacob Hollister, who's expected to compete for the starting job, though with all the receiving options they have, it's not likely either provides much fantasy value. There were just three occasions where a Bills tight end saw more than four targets last year, which means you'll use them in streaming situations. It's tough envisioning any sort of breakout season from Knox.