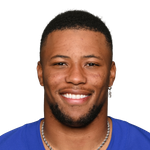 After setting the fantasy world on fire his rookie season with over 2,000 yards from scrimmage and 15 touchdowns, Barkley hasn't exactly lived up to expectations producing 1,535 total yards and eight touchdowns over 15 games the last two seasons. He tore his ACL early in the season, which should give him plenty of time to bounce back, though his violent running style could take a bit longer in recovery. The Giants suddenly have more weapons than ever in the passing game, so Barkley is unlikely to come close to the 121 targets he saw in 2018, though he should have more scoring opportunities. There is some risk with Barkley at the top of drafts due to his knee, but when on the field, we know he'll produce.