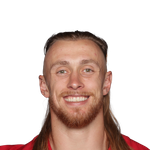 Since Kittle came into the NFL, he's produced TE1-type numbers in 58.5 percent of his games, which ranks third among all tight ends since 2000, ahead of guys like Tony Gonzalez and Jimmy Graham. He's in the prime of his career and now gets an upgrade at quarterback? He hasn't scored many touchdowns (never more than five), which has kept him out of the Travis Kelce territory. If he gets a bump in touchdowns with Trey Lance, we could see a Kelce-like finish in 2021 for Kittle. Health has proven to be an obstacle, but you shouldn't bet against Kittle finishing as a top-two tight end.