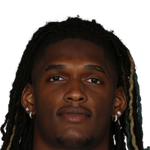 There's no telling how good Lamb would have been in his rookie season had Dak Prescott stayed healthy the entire year. With Prescott under center for the first five games, Lamb was the WR12 in half-PPR formats. Without Prescott, he was 32nd, and rarely explosive (topping out at 85 yards receiving, and only twice surpassing 65). With Prescott back and looking fully healthy, Lamb has a chance to excel as the Cowboys' slot receiver, especially if he can cut down a bit on the drops (eight total last season, tied for third-most in the league). Whether you draft him or Amari Cooper first, he should be an excellent WR2 with upside.