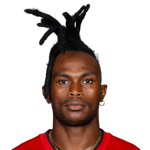 The public perception on Jones is that he's towards the end of his career, but that's simply not true. In fact, he averaged a career-high 11.3 yards per target during the 2020 season and was the WR13 in half-PPR points per game while ceding plenty of work to up-and-coming superstar Calvin Ridley. It'll be a similar situation in Tennessee, as Jones will now play alongside what might be the next generation's Julio Jones, and that's A.J. Brown. Similar to Atlanta, Jones and Brown are going to cap each other's truly elite ceiling, but as Jones and Ridley proved last year, it's certainly not out of the realm of possibilities that they're both top-12 wide receivers, especially when you factor in Ryan Tannehill's efficiency. Oh, and stop calling Jones injury prone - he's played at least 14 games in seven of the last nine seasons, and has totaled at least 1,394 yards in six of the last seven seasons. You don't do that if you're injury prone.