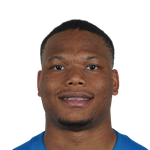 Sure, Montgomery finished as the RB4 last year. There were many factors that led to that, particularly the injury to Tarik Cohen, freeing up tons of targets in the passing game. Over the course of Montgomery's short career, he's played 19 games with Cohen and 12 games without him. In the games with Cohen, he averaged 2.32 targets per game. In the 12 games without him, that number rose to 4.92 targets per game. Well, Cohen is back, and the team signed Damien Williams, who's a better receiving back than Montgomery. On top of Cohen missing, the Bears had a ridiculously easy schedule down the stretch, playing against the Packers twice, Lions, Texans, Vikings, and Jaguars to close out the season. Did you know that Montgomery was the RB20 after 10 weeks (prior to starting that schedule)? He's a fine low-end RB2, but don't go about your day thinking you're getting a steal in the fourth round or anything.