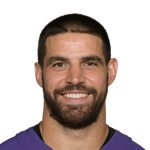 It's kind of crazy how much Andrews gets disrespected by the fantasy community. He's tallied 2,105 yards and 20 touchdowns over his first three seasons in the league. That's the ninth-most yardage by a tight end in the post-merger era during his first three seasons. You know what other tight ends are on that list? George Kittle, Rob Gronkowski, Jimmy Graham, and Kellen Winslow. Sure, the Ravens went out and added some pass catchers, but Andrews is the go-to option for Lamar Jackson over the middle of the field and in the red zone. Health has been the biggest obstacle for Andrews, but if he's able to stay on the field, he should be the No. 4 tight end off the board.