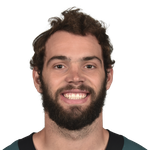 Despite Zach Ertz on the roster and stealing tons of targets, Goedert has managed to rack up 1,131 yards and eight touchdowns over his last 26 games. Had Goedert played all 16 games in 2020, his pace would've been 762 yards and four touchdowns, which would've been good enough to finish as a top-10 tight end (again, with Ertz around). It seems like a foregone conclusion that Ertz will be off the team soon, which clears a path for Goedert to be among the league leaders in targets for a tight end. It's a new offense, but Nick Sirianni comes from the Frank Reich tree, which has a history of producing tight end production. Goedert may not be a can't-miss tight end, but if there's someone who has top-five upside without being drafted there, it's him.