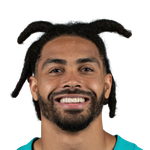 Not only will Fuller finish up his suspension and miss Week 1 this year, but he'll also be returning to the field with a new quarterback, and let's just say that life without Deshaun Watson hasn't been kind to him. In 20 games with non-Watson quarterbacks, Fuller has averaged 6.0 targets, 3.1 receptions, 38.7 yards, and 0.10 touchdowns, which is a far cry from his 6.5 targets, 4.5 receptions, 70.6 yards, and 0.67 touchdowns per game with Watson under center. Can Tua Tagovailoa take a step forward in his career in 2021? Sure, but he's not going to be Watson, and there are suddenly tons of options for him to throw to, which means Fuller is going to have to fight for his target share. There's more risk than you'd like with Fuller, who's also had his fair share of injuries throughout his career. Getting him as a WR4 would be ideal, as you aren't relying on him for production week-in and week-out.