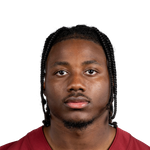 It was good to see Samuel finally have his breakout season in year four, though it's worth noting that his numbers have improved every year. The issue, however, is that he's being reunited with offensive coordinator Scott Turner, who couldn't get the most out of Samuel during the 2019 season. While Samuel saw a career-high 106 targets that year, he averaged a minuscule 5.9 yards per target while used in an incorrect role. Will that change? It's tough to say, but Terry McLaurin, J.D. McKissic, Antonio Gibson, and Logan Thomas are all competition for targets with his new team. Samuel should have plenty of manufactured touches, but don't automatically assume he's as valuable as he was in 2020.