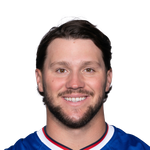 Josh Allen had a MVP caliber season and ended up as QB1 overall in fantasy. He finished '20 with 4.5K passing yards, a 69% completion rate, 37 TD, and 10 INT. His rushing attempts year over year stayed flat, but his yardage fell from 510 to 421 yards. That's probably a good thing because it meant he wasn't running with abandon as much. However, he still managed eight rush TDs. Outside of one dreadful game in Week 7 vs. SEA, the O-Line played well, but the run game made the Bills one-dimensional offensively, and Allen to Stefon Diggs was pretty much that dimension. In the playoffs, "reckless" Josh Allen started to creep back in as he tried to do too much under pressure, twisting and turning, trying to make plays instead of eating a sack or throwing a ball away. More balance from the run game in 2021 will help the Bills and Allen thrive this season. However, that's not a given. Six times, Josh Allen scored 30+ fantasy points. A fantasy regular season is usually 13-14 weeks long. He's good for six wins, and that puts you in the playoff hunt.