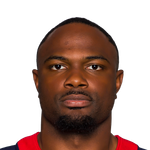 If you liked Dameon Pierce before the NFL Draft, then you should be thrilled about his landing spot in Houston.

There's a chance that PFF's highest-graded running back from the FBS (92.0) in 2021 carves out a role on early downs even though the team added Marlon Mack this offseason. News flash, people - Mack signed a one-year, $two-million deal with Houston, and it's less than the team is paying Rex Burkhead..1 million of Burkhead's $2.35 million contract is fully guaranteed.

We could easily see Mack released as much as we could see Pierce become the team's starting running back.

Although my one reservation with Pierce is that traditionally New England has been very stingy about featuring rookie running backs historically - especially ones drafted late. During Nick Caserio's tenure with the Patriots, Stevan Ridley's 87 carries were the most for any non-first-round rookie running back.

It was until Caserio left New England for Houston, that Rhamondre Stevenson broke that mark with 133 carries in 2021.

Not to mention, there's clearly an affinity with veteran running backs that Texans can't seem to quit. They force-fed David Johnson and Mark Ingram II among other veterans last season, despite having some younger players they could give reps to.

Caserio's post-draft press conference cited Pierce as someone that needs to earn a role and be a factor on special teams. So pump the brakes on Pierce RB1 szn ever so slightly.

The fact Pierce never fully took over Florida's backfield does raise red flags. His 12% career dominator rating is eerily similar to Trey Sermon (12%) from last season, and Sermon struggled to separate himself from the pack in his rookie campaign.

Even during his breakout senior season, the 5-foot-10 and 218-pound running back earned just a 22% dominator rating while sharing the backfield alongside fellow draft-eligible running back Malik Davis.

However, I am willing to offer some benefit of the doubt after Pierce never topped 106 carries in college.

There may have been some underlying issue with former Gators head coach Dan Mullen that prevented Pierce from seeing a more featured role. Case in point: Pierce only had two games with double-digit carries in 2021, both of which came after Mullen was fired toward the end of the season.

Pierce's lackluster dominator rating doesn't capture his coach's potential ineptitude. The fact Pierce competed with NFL talent like Jordan Scarlett and La'Mical Perine very early in his college career paints a better picture of how his impact will be felt in years to come. But from the get-go, I doubt we see Pierce be a major fantasy factor to start the 2022 season.