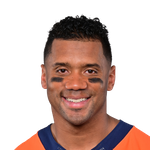 Russell Wilson's weapons/supporting cast overall are pretty even going from Seattle to Denver, but Nathaniel Hackett calling the shots is an upgrade over Pete Carroll.

Hackett's obviously had success with Aaron Rodgers that has translated into fantasy, so a top-five fantasy quarterback outcome is firmly in play with Wilson in 2022. After all, Wilson's long track record of efficient fantasy play is undeniable - he has finished among the top-six fantasy QBs five times since 2014.

I like his chances of making it seven in 2022. Because Wilson is still among the league's elite passers when healthy. Before the finger derailed his season, Russ led the NFL in yards per attempt (10.4), passer rating (133.6) and passer rating from a clean pocket (130.9) before Week 5. Wilson also finished the season on a high note, averaging over 24 fantasy points per game in his last three contests.

That combined with a plethora of weapons in Denver, makes it very plausible he sees similar immediate success that other quarterbacks like Tom Brady and Matthew Stafford have had since changing teams late into their careers.

However a QB10 ADP might be too rich, as I think he belongs in the same tier as Kirk Cousins, Derek Carr, and Matthew Stafford.

Currently, he's the only QB drafted inside the top-12 that failed to hit the fantasy QB1 mark at least 50% of the time in 2021.

Considering the only "upgrade" Wilson has moved from Denver to Seattle is more favorable coaching (not necessarily receiver personnel, especially with the underrated loss of Tim Patrick), he's likely going to be inconsistent and overvalued due to a lack of rushing juice.