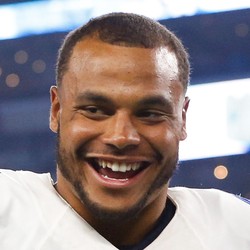 Dak finished as the QB2 last year for fantasy and the Cowboys just added CeeDee Lamb to this offense. Dak's a solid candidate to finish within the top-5 again in 2020.

Dak Prescott and the Cowboys ‘not close’ to reaching contract extension

According to a source, Dak Prescott and the Dallas Cowboys are not close on a multi-year contract extension for the franchise quarterback.

Prescott will play the 2020 season on the $31.4M franchise tag he signed if no extension is agreed to by the July 15 deadline. Prescott has a full arsenal of weapons at his disposal this season and the Cowboys should be one of the most explosive offenses in the NFL. If Prescott gets the job done this season while playing on the franchise tag, he’s likely to see a big payday coming next offseason. He’s currently going in the top-5 QB in fantasy drafts, but the argument could be made for him as the 3rd best QB after Patrick Mahomes and Lamar Jackson.

(2020)
View Full Schedule
Who Should I Draft?
Most Accurate Experts
for Dak Prescott
Do Not Sell
Are you looking to contact Customer Support about a subscription or account related question?
Yes
No, I'm a California resident looking for the California Consumer Privacy Act form