How should fantasy owners react to Josh Gordon’s reinstatement?

NFL.com’s Ian Rapoport was the first report that commissioner Roger Goodell will reinstate Browns wide receiver Josh Gordon after serving a four-game suspension to begin the season. He was suspended two games in 2013, 10 games in 2014, and for the entire 2015 season after violating the league’s substance-abuse policy. The saga continued in April when he was denied reinstatement after Gordon failed a drug test due to the samples testing positive for marijuana. The levels apparently did not meet the NFL threshold for suspension, but any diluted samples are still considered the same as a positive test. This news is stunning and Gordon will be eligible to return in Week 5 of the 2016 season. This article will share what you need to know about Gordon’s return from a fantasy football perspective.

The Browns have not publicly said that they will take Gordon back
The Browns’ organization have said that they will not address Gordon’s situation until the NFL makes a ruling. The next step would be to have a face-to-face meeting in order to assess Gordon’s state of mind before committing to welcome him back to the organization. The probability is high, in my opinion, that the Browns’ organization will welcome him back with open arms.

Gordon will be able to participate in training camp and play in all of the Browns’ preseason games
This is a bonus I have not seen any suspended players receive. It will allow Gordon to bond with teammates, begin the process of getting back into football shape after a two-year hiatus, and develop a rapport with Browns quarterback Robert Griffin III. He has only played in five games over the past two NFL seasons. Gordon’s first regular season game would be against the New England Patriots in Week 5. This is the same day quarterback Tom Brady would be eligible to return from his four-game Deflategate suspension. Gordon will have ample time to be mentally and physically prepared to reboot his career.

Gordon’s statistical production up to this point
Gordon has a career fantasy points per touch of 2.20. He has 161 receptions for 2,754 yards and 14 touchdowns in 35 career games. 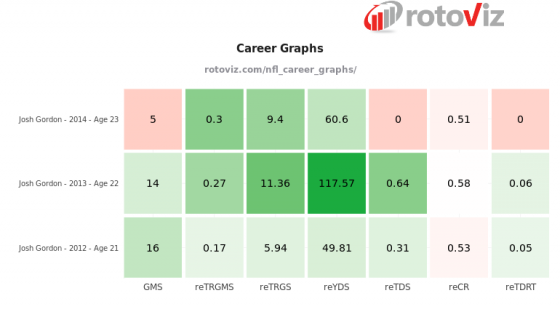 Gordon emerged during the 2013 season leading the league in receiving yards with 1,646 and also catching nine touchdowns despite missing the first two games of the season. The 2013 season culminated in him being selected to the Pro Bowl and helping fantasy football owners win championships as Gordon leveraged a 27 percent target share in 14 games. The Browns new regime with head coach Hue Jackson drafted Corey Coleman as their franchise No. 1 wide receiver. Gordon’s reinstatement brings immediate change not only to the Browns but also to the fantasy community and how they perceive Coleman moving forward.

What effect will Gordon’s potential return have on the Browns’ offense and your fantasy team?
Corey Coleman is immediately impacted by Gordon’s return. The one thing that made him attractive in fantasy drafts this season was his target share under the assumption he would be the Browns No. 1 wide receiver. Gary Barnidge will also be impacted as he will likely become the third receiving option behind Gordon and Coleman. Are you high on Duke Johnson this season? He is likely to be relegated to the fourth receiving option.

When should you draft Josh Gordon?
The best approach to take with Gordon is to view him as a high-upside WR3 and consider drafting him in the middle rounds. It will be challenging for him to replicate his 2013 target share of 27 percent considering the other assets the Browns have in the passing game. Coleman’s average draft position (ADP) will fall due to the return of Gordon, who places on a ceiling on his upside. I anticipate Barnidge’s ADP to remain relatively unchanged, but make sure you have proper expectations if you want to target him.

Conclusion
The return of Gordon is a great thing for the Browns and fantasy football owners. Everyone loves a redemption story, and this is a great opportunity for him to resurrect his career. I’m onboard with taking him anywhere from the sixth to eighth round in fantasy drafts. I would consider Coleman from round nine on due to his lack of upside due to the presence of Gordon. Head coach Hue Jackson has a reputation of leveraging his offensive talent. The Browns’ offense may surprise the NFL and fantasy owners in 2016.

It will fascinating to see if Griffin, Gordon, and Coleman can recreate the magic of the Baylor offense at the NFL level.