We are now less than a month away from Selection Sunday. Soon enough, every small school and team below the bubble will be fighting in their conference tournaments for their dreams to make the Big Dance. Before all that happens, I figured we could all enjoy in the upcoming excitement together by taking an early look at how the 68-team bracket might look if it came out today. I’ll have two more bracketology reports over the next three weeks. Today, we’ll take a look at the locks, near-locks, bubble teams and longshots before getting to the full bracket.

Scroll down to the bottom for the full projected bracket

If you are looking to get a head start on your bracket contests, TeamRankings always has the best info come tournament time. I live on that site from Selection Sunday until tip-off. They’ve got all kinds of discounts on their bracket picks and analysis going on before Selection Sunday.

Teams in contention for 1 seed

Highlight Team: Baylor Bears
With the way Baylor is playing right now on their current 23-game winning streak, it is hard to imagine the committee would select anyone else to be the top overall seed. They’ve got upcoming matchups at home against #3 Kansas and at #17 West Virginia but they already won against both teams by double-digits including in Lawrence. Even if they lose one or two more games, you can expect Baylor to be at the top line of their region in a few weeks.

Other locks to dance

Highlight Team: Ohio State Buckeyes
Earlier in the season, the #25 Buckeyes were ranked near the top of the country after a 9-0 start including wins at then #7 UNC, #10 Villanova and #6 Kentucky. This team clearly has Final Four talent but a terrible run with six losses in seven Big 10 games had their at-large bid even in question. Ever since, they’ve corrected with wins over four likely tournament teams. That should be enough to get them in the field even if they lose a few of their tough upcoming games versus Iowa, Maryland, Michigan, Illinois and/or Michigan St.

At-Large Bubble (In unless they meltdown)

Highlight Team: BYU Cougars
As of now, BYU still has an outside shot at climbing to a 4 or even 3-seed if they can win one of their likely two remaining games versus Gonzaga. You might think that their odds are low considering they lost by 23 in Spokane a month ago, but this BYU team lives and dies by the three-ball. They make 11 of them per game and if they get hot, this team can beat anyone in the country. On the flip side, two losses to the Zags plus another loss like the ones versus Boise St and San Francisco, might be enough to knock them to the outside looking in.

At-Large Bubble (Most likely in)

Highlight Team: Virginia Cavaliers
In case you haven’t noticed, our defending national champions haven’t quite lived up to the hype this year, dropping four of five games in early January. They have since begun to right the ship with a close loss against #5 Louisville and a win against #6 Florida St. With upcoming home games versus Duke and Louisville, Virginia could quickly climb up the rankings but if they drop three or even four games before Selection Sunday, the champs may just end up in the NIT.

At-Large Bubble (As close as it gets)

Highlight Team: Indiana Hoosiers
You might think a 16-9 record while playing in the deepest conference we’ve seen in years, and perhaps ever, would be plenty to get Indiana an at-large bid. That may end up being the case, but besides Rutgers, they played the easiest out of conference schedule and have now lost five of their last six Big 10 games. This team could be quite dangerous if they make earn a bid but with upcoming matchups against tournament teams like Penn St, Purdue, Illinois and Wisconsin, it won’t be a walk in the park to fix their resume.

At-Large Bubble (Will have to step up)

Highlight Team: UConn Huskies
Although UConn sits at 14-11, their #75 strength of schedule will likely require them to kick it up another gear before Selection Sunday. To put that into perspective, Southern Miss out of Conference USA has played a more difficult schedule this season. UConn has just one strong win on their resume (by 3 at home to Florida) and will likely need to beat Houston at home in two weeks or make a run to the conference championship in order to secure an at-large bid.

Highlight Team: UNC Tar Heels
This historic program began the season among the top 10 teams in the country according to the AP-Poll but have had an awful season so far, winning just 10 of their 26 games. After losing by 25 at home to Ohio St, UNC has only won 4 of their past 19 games including six straight as of Monday’s loss at Notre Dame. Outside of winning the ACC tournament, their only realistic path to a bid is to win Saturday in Louisville, two weeks from Saturday at Duke then make some serious noise in the conference tournament.

There are 25 mid-major conference tournaments which will all hand out auto-bids. Only a few of them currently feature teams likely to receive at-large bids but as we’ve seen time and time again, that number will grow to 5, 6 or perhaps 7. Should any of those teams (namely Gonzaga, Houston, San Diego St) lose in their conference tournaments, the bubble will shrink. Don’t be surprised if E Tennessee St, Yale and/or Northern Iowa join them over the next few weeks.

I’ll check back in a few weeks from now to update the board. Now, let’s get a glimpse at how the bracket might play out if it was built by the committee today. 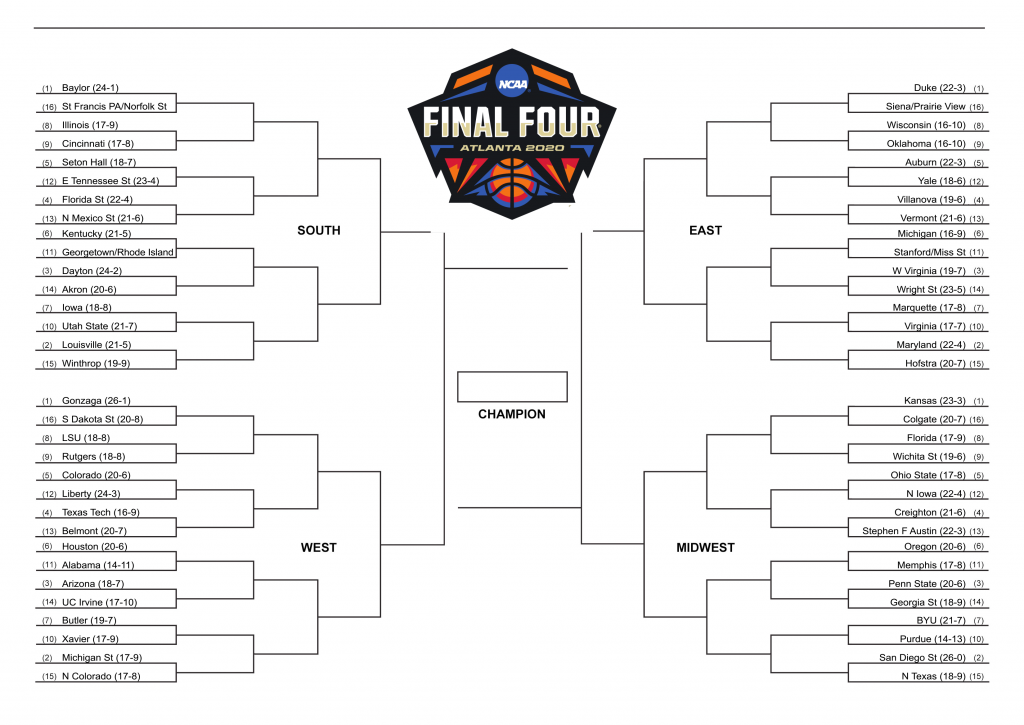 Finally, if you’re getting in a bracket contest this year, don’t forget to check out the March Madness advice from TeamRankings.

2020 March Madness Bracket Results (What Would Have Been)