I have been playing in the same fantasy baseball league for 15 years with my friends. The league started in 2005 when we were all in ninth grade, and the league is more competitive now than it ever has been. One thing that has changed over time is the level of competition. As a kid with an interest in math and computer programming, I got on the advanced metrics and statistical analysis early on and it brought a lot of success along with it. Unfortunately for me, most of the league has now caught on to the nuances of baseball statistics, and my advantage has shrunk quite a bit.

Does anybody else find themselves in a situation like that? I am guessing there are a lot of people that do. The metrics are simply more well known and easier to find and understand now. I am confident that the percentage of fantasy baseball players that are just looking at box scores and player cards has really diminished over time and is probably at an all-time low right now. With that edge being reduced, we have to hammer the other edges that are out there. One way to do that is to really focus on your league settings. Much of the expert rankings and analysis and whatnot that you find online will be tailored to standard league types, which opens up an opportunity for us if we play with non-standard settings.

One of the most common non-standard leagues is the on-base percentage league. This typically means that the batting average category is replaced by on-base percentage. If you are in this type of league, you will almost certainly have a couple managers not taking that into account when assembling their teams, which opens up an advantage to be exploited. So how do you take advantage of this? Well the answer is obvious – I don’t think I really need to tell you. Ignore batting average, and focus hard on walk rates. Get your hands on some projections, delete that batting average column and start doing some work!

What I have done to give you some workable information is downloaded the 2020 hitter Steamer projections from FanGraphs and ranked all the hitters twice, the first time using batting average (along with runs, home runs, runs batted in, and steals), and the second time with on-base percentage. By doing this, we can check the difference in scores between those lists and see who has the biggest positive and biggest negative differentials.

Mike Trout (CF – LAA)
Yeah, Mike Trout. He grades out as the #1 hitter by the Steamer projections in both league types, but the gap between him and the #2 hitter grows dramatically when you switch to an OBP league. That is because he is projected for a .439 OBP, while the next highest in the league is 33 points behind him (Juan Soto at .406). Trout is a man among boys in an OBP league.

Brandon Nimmo (LF, CF, RF – NYM)
This is actually the biggest gainer in the study, as Nimmo’s .358 on-base percentage is a very strong number, and his .231 projected batting average is just a killer. That differential seems ridiculous, but the guy did hit .221 last year while still managing a .375 on-base percentage because he drew 46 walks in 254 plate appearances for a ridiculous 18% walk rate. He probably does not need to be drafted in most non-OBP leagues, but he does check in as a nice value guy late in an OBP league.

Joey Gallo (LF, CF – TEX)
A true enigma is Gallo, who is as close to a true three-outcome hitter as you can find (home run, walk, strikeout). He is projected for a 42% strikeout rate but an 18% walk rate. That leads to a huge batting average to on-base percentage differential of 119 points (.230 to .349). If you find yourself in a league where Gallo’s black hole batting average will not hurt you, he is a legitimate top-20 hitter with all the power he brings to the table.

Rhys Hoskins (1B, LF – PHI)
Talk about a slump. Hoskins was firmly in the drop zone in the second half of last year as he failed to even hit his weight over the last couple months of the season. He is a big time question mark coming into 2020, but for OBP leagues, he is a very interesting guy to grab. He projects for one of the league’s highest walk rates at 19%, which counteracts his brutal 30% strikeout rate projection — enough to give him a more than respectable .365 on-base percentage projection to go with that raw power. Hoskins goes from a bench bat in a batting-average league to a legitimate starter at first base in an OBP league. He is one of the best values on the board when you eliminate the batting average category.

Here are your top 20 gainers when switching from a batting average league to an OBP league, along with their relevant projections: 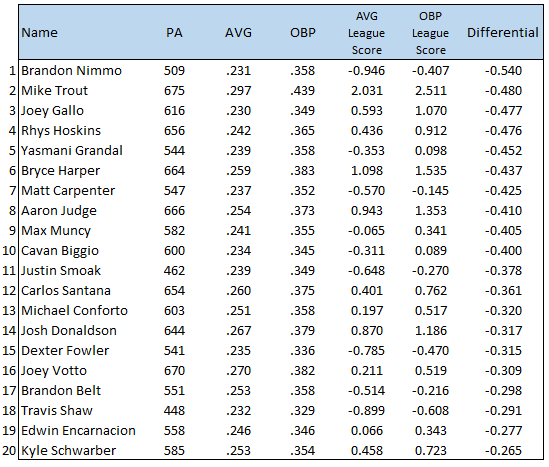 Conversely, of course, we have players that lose value when switching these league settings. These players will be low walk rate players, as you see in the top-20 value losers when switching from a batting-average league to an on-base percentage league: 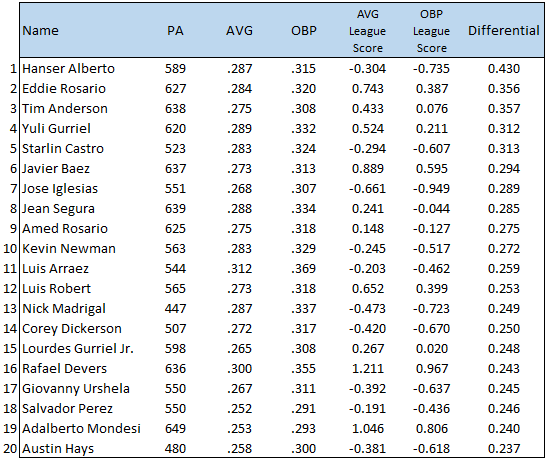 This is really important stuff to know. If you find yourself in an OBP league, you can make a really strong offense after the first few rounds of the draft with guys like Gallo, Hoskins, Matt Carpenter, and Cavan Biggio. Of course, it is important to know who you are playing against. This trick won’t work as well if you have a few sharp players that will also be on top of it, so put some thought into that.

That’s it, and that’s all. Happy drafting everybody!

Hitters Outside the Top 100 Overall that Can Finish No. 1 at Their Position (Fantasy Baseball)