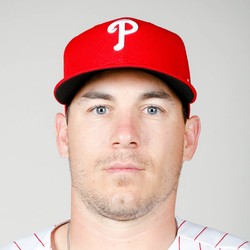 Phillies catcher J.T. Realmuto went 0-for-2 with two runs scored and a stolen base in Wednesday's win over the Braves. The steal was his ninth of the season.

Realmuto has been one of the most valuable catchers in fantasy again this season even without the stolen bases, so the nine has had added for fantasy owners this year is just an added bonus at a weak fantasy position.