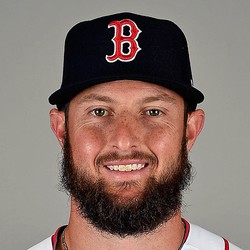 Josh Smith gives up four runs in loss to the Orioles

Josh Smith took the loss against the Orioles on Monday, giving up four earned runs on five hits over 3 1/3 innings in a 4-1 defeat for the Red Sox. He struck out three and walked two.

Smith is a 31-year-old journeyman who has pitched for three major league teams now and has a 5.40 ERA over 69 appearances for his career. Smith is just up to eat up innings and has no fantasy value.