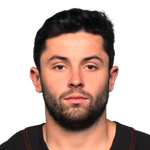 It was a nightmare sophomore season for Mayfield, who regressed rather than progressed. His completion percentage dropped 4.4 points, yards per attempt dropped 0.5 yards, he threw five less touchdowns, and threw seven more interceptions. Wait, I thought Odell Beckham was supposed to help? It's clear that Freddie Kitchens hurt all players involved, as even Nick Chubb was extremely inefficient in the red zone, totaling negative 16 yards on nine carries inside the five-yard-line. Let's just erase that season, shall we? Kevin Stefanski will be the new head coach and play caller. Do we have a lot to go off? Not really. What we do know is that they added two offensive linemen who'll make a difference at the most important positions, as well as add a pass-catching tight end. It seems they would like to replicate what the Vikings did last year under Stefanski, which would be brutal for Mayfield's outlook, as Kirk Cousins threw the ball just 444 times. Mayfield has some mobility but not enough to overcome that low of volume through the air. But knowing that's possible, we know Mayfield could have a lower floor than most would like to admit. He should be treated as an excellent QB2 in Superflex/2QB formats, while being looked at as a streamer in standard leagues.