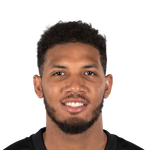 After many panicked based on his Week 1 usage, Boyd reminded fantasy owners that he's still a very large part of this offense with his seven-catch, 72-yard, one-touchdown performance in Week 2. That was a smash spot, though, as he was playing against a backup slot cornerback. This week, it's going to be a lot different, as the Eagles went out and acquired one of the best slot cornerbacks in the game. Nickell Robey-Coleman has been a thorn in receivers' side, allowing just a 61.9 percent completion rate, which is low for a slot cornerback, and 6.04 yards per target in his coverage. To be fair, Boyd did play against him last year while he was on the Rams and posted a 6/65/0 line on nine targets, so it wasn't a complete waste. We're probably looking at a situation similar to Cooper Kupp last week, who wound up with five catches for 81 yards. This is not the plus matchup it was for wide receivers last year, so don't let anyone tell you that. Boyd should be considered a low-upside WR3 in this game.