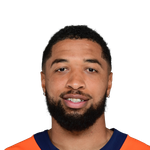 What in the world is happening when Patrick is the No. 38 wide receiver points per game, in front of guys like Julio Jones, Marquise Brown, and Michael Gallup? He's caught 16-of-21 targets for 209 yards and two touchdowns, which is impressive given his quarterback situation. And now, the Patriots are going to be without No. 1 cornerback Stephon Gilmore, which leaves J.C. Jackson as their top perimeter cornerback. He's allowed 10-of-13 passing for 102 yards and a touchdown in his coverage this year. The Patriots haven't allowed a 100-yard receiver against them this year, but they have allowed six different receivers to post double-digit PPR days. They've allowed seven touchdowns to receivers which ranks as the third-most in the league, and that's despite playing just four games. It's also what's propelled them to allow the most points per target (2.24) to wide receivers. We can't forget about Patrick's first three games where he didn't top four catches or 43 yards, so he's far from a lock, but it helps to know that Noah Fant is likely out for this game. Patrick's in the WR4 conversation this week.