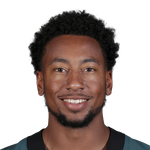 From the time that Fulgham came into the lineup in Week 4 up until his bye in Week 9, Fulgham had scored more fantasy points (82.0) and yards (435) than any other receiver. His 44 targets ranked fourth during that time, so it's not solely on volume; he's been efficient. What makes it even more impressive is that he's done it while Wentz has struggled as a passer. He's already played the Giants a few weeks ago, seeing 11 targets and turning them into five catches for 73 yards. That's actually a pretty good finishing line against them, as James Bradberry has done a good job with No. 1 receivers most of the time. Prior to Terry McLaurin hitting them up for 7/115/1 last week, the best performance they'd allowed to a perimeter receiver was 5/55/1, and that includes games against McLaurin (the first time), Mike Evans, Fulgham, Allen Robinson, Diontae Johnson, Robert Woods, and Amari Cooper. McLaurin's Week 9 performance was just the third time a receiver had totaled more than 74 yards against them, period. You're starting Fulgham as a WR2 right now, but you're hoping they don't have Bradberry shadow him with Reagor in the lineup, as it would limit his ceiling.